Mixed-Generational Housing: Seniors and Families with Kids in the City

Senior housing is usually separate from where families with kids live and yet, seniors and families share surprisingly many common housing and environment design needs1. Living in the city has advantages such as jobs, transportation options, shopping, parks, entertainment, and services. Unfortunately, the seniors and families typically live outside the urban center and miss out on the urban advantages. The goal of mix-generational housing is two fold: design for the youngest to the oldest resident to live in close proximity to each other and the urban center. 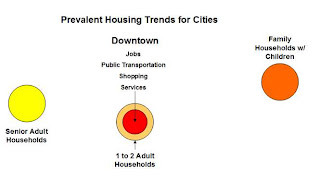 Our first proposal is that there appears to be benefits by co-locating the seniors and families with children. Instead of duplicating services in multiple parts of town, services would be consolidated in one location. The APA briefing paper2 reports that the AARP research has shown that seniors do want to live closer to younger people.

From a business case perspective, in addition to the cost savings by combining the similar services, demographic data is indicating that seniors and children will compose almost half of the population in the upcoming years.3 Thus, there should be a good financial case for co-locating the seniors and kids.

To gain additional synergies, such as restaurants that serve the business crowd during the day and the families in the evenings, our second proposal is to locate the mixed-generational housing within the downtown or in close proximity. This will reduce the commute time for the family income earners thereby freeing up more time to spend with the family, creating stronger families. This location choice ties into the growing movement of walkable, transit-oriented communities with the live-work-play mentality.

The resulting representation of the city now looks like: 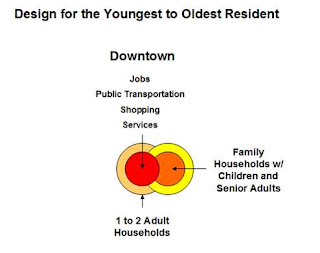 It should be noted that designing for seniors and families in no way leaves out singles and couples with no children. These demographics will benefit from the design as well. 4

The Human Life Project® has a list of guiding principles for Mixed-Generational Housing:

• Design for youngest to oldest resident

• Effective use of resources

The first observation came from a senior focus group. Their comments were that if you design the city for the seniors, you will accommodate everyone else as well. We believe there is significant truth in this perception, but that it is not completely accurate. For us, it seems as though senior-oriented design will result in maybe 80% of family needs being met. For example, seniors can probably be comfortable with a 1-2 bedroom unit. However, families with more than one child will need 3-4 bedrooms. With some foresight and additional planning, senior design can also include the families with children. This should accomplish about 95% of the total design. The last piece to add is the support for singles and couples, which should be a relatively small step to take once the seniors and families are adequately supported.

The second observation has come from trying to research family-friendly cities and more specifically family-friendly design standards. A prominent west coast city undertook a commendable effort to create family-friendly housing. However, a young couple could not find an adequate three bedroom family unit downtown. For example, they said that the size of the children's bedroom was not big enough for a bed and that to them, it seemed more like a home office. Thus, proper design standards are imperative to make sure that developers create housing that will truly meet the needs of the intended residents.

The Human Life Project® has created a vision for a "multi-mixed" housing design concept. Principally, mixed-generational housing offers both senior units and family units. The design concept is very flexible, and can include mixed-use with businesses and supporting services. Preferably, it would be mixed-income as well. Our designs do support efficient use of space and other principles that can lead to cost effective housing as well as adding of amenities for the higher end residents. Another goal is to also include multiple transportation options (mixed-transportation), encouraging walking, bicycling, and public transit.

We envision a number of benefits for this type of design. The first benefit is aging in neighborhood. The concept is that as the person's state in life changes, they can move a very short distance to a more appropriate house. A single young adult may start with a 1 bedroom unit. Once married, they can move to a 2 bedroom unit. As family size expands, the family moves to the larger 3 to 4 bedroom units. Finally, when the couple becomes empty nesters and no longer want to deal with stairs, they can move to one of the assessable units. The concept is that all of these units could be within the same building structure. Consequently, as a person's state in life changes, they have the option to stay in the same neighborhood and retain friends, favorite restaurants, grocery store, bank, place of worship, etc.

The topic of "aging in place" seems to be gaining momentum. We actually would like to dissuade this because of a couple of observations. Aging in place principles would require that the larger family units incorporate accessibility features so that as the parents age, they can still function well. Instead, aging in neighborhood is encouraged. Our proposal is that the features would only be in the senior accessible units, which the person would move to as physical condition changes. Thus, they could cash out some of the equity from larger family unit, move to the smaller assessable unit, and use this extra money to help fund their retirement. The larger family unit is then passed along to the next generation of families with young children. This is a more active approach to addressing generational housing needs rather than stationary.

Another observation in the progression of cities over time is how young families initially move close to schools and then remain in the same house many years after the children graduate. In our town, this has resulted in school neighborhoods with few children. However, housing options are limited for seniors to move within the city. Thus, families with the young children are often forced to live remote from the schools. We think that our proposed design will allow the continual influx of families with young children so that the school enrollment can be maintained.

Another anticipated benefit is for the formation of neighborhood social networks. We are hoping that the design will encourage a high degree of social interaction between the residents which will result in the neighbors helping one another. For example, the family may check in on a senior periodically. The senior could call upon the family once in a while for help with small tasks. The senior in turn can occasionally watch the kids when the parents need to go somewhere.

I would be interested in feedback (scottranville@humanlifeproject.com) on this topic.

What do you think of the two main proposals?

a. Locating seniors and families with children close to one another

b. Locating the seniors/families near the business center

What is the best way for implementing mixed-generational housing?

We are guessing that a combination of "push" and "pull" will likely be needed. Our observations so far is that the concepts are more accepted at the comprehensive plan level for a city rather than changing municipal codes. Thus, some "push" will be needed to encourage cities to change zoning and public policy to move in a direction of uniting the generations within the city by addressing specific housing needs for seniors and families with kids. However, cities do not seem to be in the position to mandate this type of design to developers. On the flip side, urban planners and architects working with developers are in a great position to do some "pulling" to start proposing and implementing multi-generation housing to show feasibility, desirability for residents, and profitability.

The following quotes are from the American Planning Association briefing paper, “Multigenerational Planning: Using smart growth and universal design to link the needs of children and the aging population,” http://www.planning.org/research/family/briefingpapers/multigenerational.htm.

2 “Unfortunately, most programs for the elderly have been built on the notion of age segregation — in services, housing, and even transportation. Yet recent research by AARP has shown that most aging Americans do not want to live in communities separate from younger people.”

4 “Communities built to address the needs of older persons and families are communities that can serve all residents well.”

Posted by Staff for the Human Life Project at 5:34 AM

I agree with the principals outlined, however, some success, or lack thereof, will be attributed to the built structure.
For example, houses with front doors inset, or set back from the front of the house, doesn't promote community engagement. There is little chance of catching sight of a neighbour to wave "hello", to ever developing any kind of friendship of neighborliness; little chance of those 'eyes on the street' which contribute to the safety of the neighborhood.
Another thing in consideration of community engagement is the transient nature of people today. 2 to 3 years and a lot of people are moving on, never getting to know their neighbors.

My wife and I are recently-retired and live in a low-moderate income neighborhood of single-family houses. We have lived in an area with college student rentals and young families with small children.
We prefer the quiet of our current situation, to the late-night partying of students, and the groups of roving youth we experienced before.
Yet on an intellectual level, a mixed generational approach seems desirable. Again, the Devil is in the details, in addressing differences in time schedules, daily routines, and tolerance for noise, traffic, and degrees of privacy.
It is often difficult to get a truly diverse, representative discussion / planning group together! But seems essential if we are to begin planning for truly sustainable cities / neighborhoods.
The only seemingly successful expression of multi-generational living I have seen, was in rural Vietnam. There, multiple generations of a family, within the context of a small village, worked collectively to cultivate rice in the surrounding real estate, uaually owned by a wealthy absentee landlord.
It is one thing if the crying baby is your grandson, and you can comfort him, it's quite another if it is a neighbors kid, who you can hear, but never see.
Adapting multi-generational living to our urban environment seems worth exploring as we move towards a more sustainable way of life.