Note: This blog post is being written from a perspective for cities. We do realize that much can be learned from other countries. 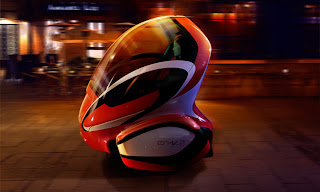 A growing number of reports indicate that some demographics, especially seniors and millennials, are interested in moving back to the city centers. Other reports promote the benefits of such "hot topics" as: increased densities, mixed-used, transit oriented developments, etc.

To support all of this, we should expand our transportation options. Granted, options such as Bus Rapid Transit programs similar to what was implemented in and is being started in and high speed trains are good. Our proposal is to consider creating "Personal Transportation Hubs.”

Consider, for example, a cohousing development with 40 to 100 units. Traditional design would indicate that 1-2 parting spots are needed per unit with some spaces for visitors. With a Personal Transportation Hub, car sharing could reduce the number of parking spaces per unit by eliminating the need for a second car, or in some cases, their primary car. Thus, there would be space savings, as well as cost savings to residents without the worry of car maintenance or insurance. If managed well, the Personal Transportation Hub could provide the members access to specialty vehicles such as a pickup truck for home chores or a convertible sports car for date nights. Hopefully, each member would indicate their destination to allow others to see this with the hope of encouraging car pooling. For example, consider when someone is going to the grocery store. A senior Personal Transportation Hub member who can no longer drive may be very appreciative of this car pooling opportunity.

Consider again a cohousing development with multiple generations. Considerable space is needed to allow everyone to store their personal adult bikes and especially the kid's bikes. At any one time, only a fraction of the bikes will be in use. Replacing the individual bikes with bike sharing stations will save garage/storage space for the housing development as a whole.

Borrowing from European experience, it would seem that as U.S. cities become more compact that scooters will become more and more acceptable to use. Scooters would then be a natural component within the available transportation options. 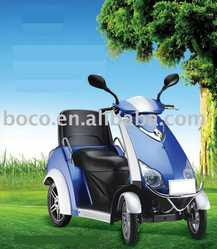 The "electric vehicle" inclusion would require changes to our transportation infrastructure as the "electric vehicle" we are referring to is a golf cart. Compared to a gasoline powered car or the new hybrid and fully electric cars, golf carts are inexpensive. The golf carts are also smaller, so it will be easier to find parking than a full size car. The idea is that the golf carts could be used for short trips by a person that is not physically able to use scooters. Consider a senior going to a doctor appointment or grocery store or a mother with kids going to a park or museum (safety improvements would probably be needed for the kids to be passengers in the golf cart).

Currently, roads do not allow golf carts. The thought is to change current regulations and designs so that the golf carts are allowed. For example, consider a -like design. Another, option to consider for retrofitting existing city infrastructure is to convert a road that has one lane in each direction. These roads could easily be converted to have 1, one-way lane for cars with the second lane being dedicated to alternative low-speed vehicles such as the golf carts, low speed scooters, and bikes. Hopefully, these alternative vehicle lanes would be safe enough so that families could also use them for bike riding with young kids.

A consideration with golf carts is inclement weather. One low cost option is a clear plastic "tarp" (specifically designed for golf carts) that goes over the golf cart. This can minimize the effects of rain, but is not overly "pretty" looking and does not help with more sever weather. Doing an internet search, the below hard shell golf cart was found. It this becomes popular, more options would likely become available. 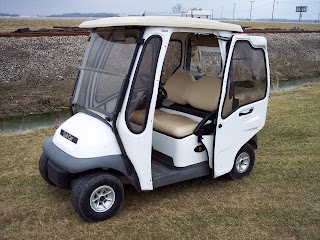 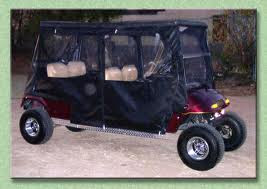 For a properly designed city, essential services such as doctor offices, grocery stores, parks, museums will be in relatively close proximity to where the people live. Thus, the golf cart should be able to easily reach these locations with a single charge. Never-the-less, an associated idea is to put charging stations around town at key locations such as senior centers and parks. The idea is that the city or a private group would pay for the cost of the charging station. Each user would pay for the electricity that they use plus a "connection" fee to help pay for the operating costs. For example, $1 connection fee + 10 cents per kWHr (market rate where we live). Hopefully the local government would be reasonable about the cost. As a reminder about trying to make the transportation more sustainable, having a solar panels attached to the charging station would be a nice option. The charging stations would hopefully have connections for many types of devices from electric cars to golf carts to computers to hand held electronic devices. This should increase the station's use and shorten the payback period.

Posted by Staff for the Human Life Project at 9:00 AM

Great blog. I am a founder of nonprofit called the Augusta Greenway Alliance, and share much of your views.

We have authored a bill entitled the Georgia Alternative, Sustainable Transportation Act. Please give us a look sometime. www.augustagreenway.org